"An imbalance in the body will lead to an imbalance in the emotions, the mind and the spirit setting one up for injury, disease, struggle and unhappiness.  When all of the offending factors are removed, and the person is given what they need in body, soul and spirit, a natural balance ensues in all areas of life, in which grace and joy return.  Everyone has some special gift embued by our Creator, which can be expressed in greater degrees when the person returns to wholeness.   We all learn from one another and in the process, lift each other up."

Specialized Training in Osteo/Neuro Therapies for Injury and Pain Relief

Extra-curricular studies included accelerated healing in the fields of osteopathy, neurology, and technological advances in sports medicine and physical therapy as taught by Dr. John Brimhall and Brimhall Protocols,  Dr. Evan Mladenoff, physician for several teams of the NFL including the Kansas City Chiefs and the Denver Broncos; and Dr. Donald Chu, head of the athletic department of Stanford University. 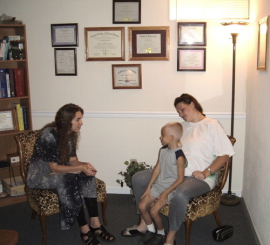 Dr. Kim began her career in nursing in 1986.  In 1988 she became ill, and after many test and medications, her symptoms continued.  Not finding relief from Orthodox Medicine, Kim turned to herbs.  Her health returned quickly and set her on a new path in medicine.  Kim began taking courses in Iridology and Applied Herbology, Nutritional Counseling, Sound Therapy, Pressure Point Therapy and Energy Medicine.

By 1992, KIm was practicing Natural Healing Arts and helping many people while nursing part time. A lover of knowledge in natural medicine, Kim subscribed to every journal she could find on the subject, as well as continued her education by taking numerous workshops and seminars.  By 1999 Kim had completed fifteen months of study in women's reproduction and midwifery through Resourcing Birth in Boulder, CO.

Dr. Kim decided to pursue a degree in natural medicine and currently holds a doctorate as a PhD of Natural Medicine with an Emphasis in Psychology granted by Stafford University.  During the last two years, beyond a naturopathic degree, Dr Kim has studied under some of  the top physicians in the country.  (see specialized training for more information.)

Dr. Kim is also a public speaker, worship leader, singer/songwriter and has published two albums.  See www.KimiGrace.com  for details and to stream music.

Dr. Kim has invested hundreds of hours over several years in research and investigation into the following topics:

*   Breaking Curses on Land and Time in Families

*   Spiritual/Pastoral Abuse in the Church

Autoimmune disorders and chronic inflammation are directly connected to the "Leaky Gut Syndrome."

In addition, there are usually several other offending factors causing the autoimmune response,  including vaccines and    GMO foods.

In removing the offending factors, autoimmune responses can be reversed and autoimmune diseases can be slowed dramatically.

Recommend this page on: